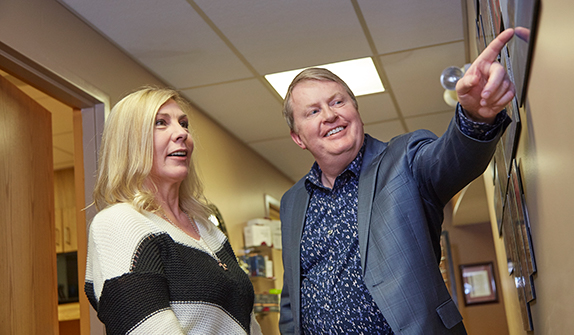 Georgi, a media marketing executive who lives and works near Minneapolis, Minnesota, was diagnosed with breast cancer in December 2016. After extensive research, she decided that she needed to have both breasts removed to beat the cancer. She learned that standard breast reconstruction requires six months of expanders placed under the chest muscles, followed by a second surgery to place breast implants.

Georgi, a passionate horsewoman who enjoys competing in Western cutting and reining, also learned that standard reconstruction could leave her with upper body and core strength limitations. These could prevent her from competitive riding or even simply lifting her saddle. Her future in horsemanship looked so grim, she considered foregoing reconstruction.

Researching breast reconstruction alternatives, Georgi found out about “oncoplastic breast surgery,” which combines breast cancer surgery with leading edge plastic surgery breast reconstruction techniques. Using an FDA-approved human acellular dermal matrix (ADM) tissue graft, the breast implant is placed over the chest muscle rather than under it. The reconstruction doesn’t affect the muscles that are so important to upper body and core strength and doesn’t require expanders. Even better, the reconstruction can be completed in the same surgery, immediately following the mastectomy.

Georgi wanted to know more. She remembered meeting Ohio plastic surgeon Paul Vanek, MD, while on vacation five years earlier. Dr. Vanek had helped her sister-in-law who was cut by coral while scuba-diving. By phone, Georgi and Dr. Vanek discussed her situation and he answered her questions.

Board certified in both general and plastic surgery, Dr. Vanek explained that he could remove the cancerous tissue in both breasts, preserving the nipples, and complete the breast reconstruction, all in one surgery.

As one of only a few doctors to provide this breakthrough breast surgery, he offered to do Georgi’s surgery at TriPoint Medical Center in Concord Township if she was willing to make the trip to Ohio. Dr. Vanek and his wife and daughter even invited Georgi to recover in their home after surgery.

Everything said “go to Ohio.” Georgi had found an established surgeon who could remove the cancer and perform plastic surgery at the same time, allowing her to quickly resume competitive horsemanship. Her local surgeon supported her choice to have the procedure. Her insurance approved the surgery as “in network.” Although far from home and family, she had a generous offer for a place to recover and not be alone. Georgi, with great faith, headed to Ohio.

On January 27, 2017, Dr. Vanek performed Georgi’s surgery at TriPoint Medical Center. He removed both breasts and the closest (sentinel) lymph node to track whether the cancer was spreading. Then he reconstructed her breasts using ADM, gel implants and nipple-sparing plastic surgery. After a week of recovery in the Vanek home and overjoyed with news that the cancer hadn’t spread, Georgi flew back to Minneapolis. Five weeks after surgery, she was back on a horse.

Today, Georgi wants others to know what she discovered and experienced. Although some women simply accept the standard or first option presented, she believes women need to find their own best option.

“I explored opportunities until I had the answers to make decisions I was comfortable with,” says Georgi. “I hope my story encourages others to do the same.”

Acellular dermal matrix (ADM) is a biologic tissue that supports the breast implant and can help provide good contour.

In nipple sparing surgery, the breast tissue is removed while leaving the breast skin and nipple in place to cover the implant.